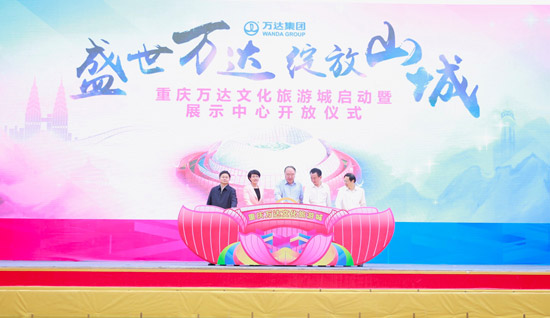 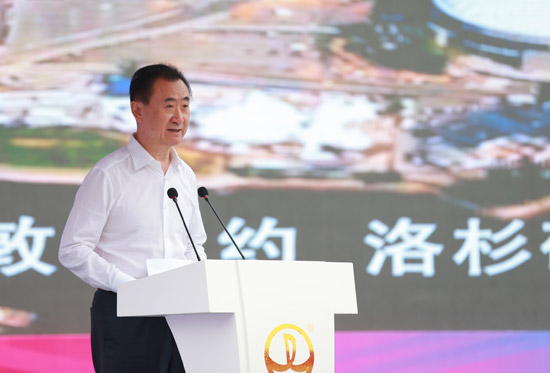 This is Wanda Group's 12th large cultural project to commence construction in the country. It is also the first Wanda City to be built in a direct-controlled municipal, and will be the largest Wanda City with the biggest investment and highest planning standard in Central China to date. Chongqing mayor Huang Qifan and Wanda Group Chairman Wang Jianlin, among others, attended the ceremony.

Chongqing Wanda City is located at the western new district of Shapingba District. This is a sub-city center slated for key development by Chongqing and also a university town of Chongqing. It is a 10-minute subway ride from the main city area; transportation is highly accessible. Chongqing Wanda City is situated on a land area of 460 hectares with total investment at RMB55 billion, of which cultural tourism investment exceeds RMB26 billion. It comprises a Wanda Mall, outdoor theme park, large-scale stage shows, vacation hotel group and a bar street, among others.

Chongqing Wanda City and Chengdu Wanda City, while relatively close in proximity, are two completely different Wanda Cities in terms of both content and appearance. Chongqing Wanda City has four major features: 1. Most indoor projects. Four large indoor amusement parks will be built in Phase I including a maritime entertainment park, a movie park, kids park and a water park. In particular, the maritime entertainment park is Wanda's global first in entertainment which will see the complete integration of marine animal display and performance with indoor roller coaster, as well as tourist interaction. The large indoor kids park will be a first in the world, bringing together entertainment, education and popular science for children. 2. Full manifestation of Chongqing's cultural theme. The characteristics of the Chongqing culture and port culture will be deeply integrated into Chonqing Wanda City's indoor and outdoor theme parks, movie park, performing arts, hotel cluster and architecture, fully reflecting both the ancient Ba kingdom culture and contemporary Chongqing history. 3. Full utilization of natural scenery. Chongqing Wanda City sits on a land parcel endowed with hills, valleys and wetlands, with two rivers running through its entire territory. As such, large bodies of water have been planned for the project and all buildings are built by the water according to the terrain, and is integrated with the natural scenery. 4. Reconstruction of historical cultural sites. Feixue Temple, which will be rebuilt in the project, dates back to the Tang dynasty. The building will be rebuilt according to the original style of the temple during the Tang dynasty. When the construction is completed, the famous historic sight of "flying snow and billowing clouds" will reappear.

Chongqing Wanda City is scheduled to be completed and to commence operation in 2020, with expected annual tourist arrivals of 20 million and an annual income of RMB8-10 billion.