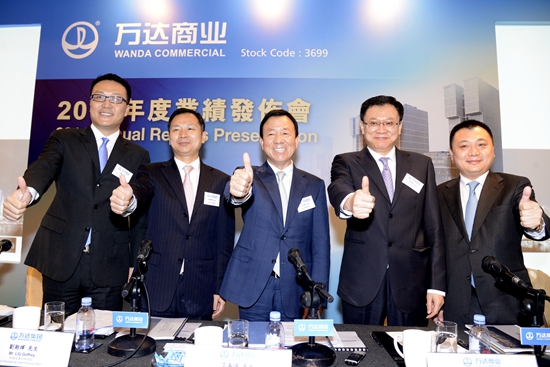 An investor raises a question at the Annual Results Presentation

Dalian Wanda Commercial Properties Co., Ltd. (the"Company") is pleased to announce the consolidated results of the Company and its subsidiaries (collectively, the "Group") for the year ended 31 December 2014.

In 2014, all the Group's businesses were carried out as scheduled and achieved remarkable financial results. The Group's total revenue amounted to RMB107,871 million, up by 24.31% as compared with 2013. The Group achieved core profit (net of fair value gains of investment properties) of RMB14,824 million in 2014, representing an increase of 14.04% compared to 2013,core profit margin was 13.74%. The increase in core profit was mainly attributable to the increase in profit of our investment property leasing and property management business as well as sales of properties. In 2014, the Group realized earnings per share of RMB6.51.

In 2014, while the real estate industry was in a recession which resulted in a slight decrease in the gross profit margin of properties sales, the Group's overall gross profit margin remained stable as compared with 2013, mainly due to the increase of both the profit margin and revenue of our property leasing and management in 2014, demonstrating the Group's strong ability to withstand cyclic risks, outstanding business administration expertise and ability to achieve sustainable profitability.

Hotel operations
As at 31 December 2014, the Group had 62 hotels in operation in 53 cities, and the total number of rooms was 19,165, including 35 self-operated hotels and 27 hotels operated by world-known third-party hotel managers, all of which are situated in urban centers and travel hotspots. In 2014, the Group's hotel operations realized owner's profit of RMB578 million, representing an increase of 1.72% as compared with RMB568 million in 2013. At the end of 2014, the Group has already acquired land for the development of overseas hotel projects in global hot spots such as London, Los Angeles, Chicago, Madrid and Brisbane, which would lay a solid foundation for Wanda Hotel's expansion into international market, and significantly improve the brand influence of the Wanda hotels.

Looking forward to 2015, the Company said: "China has transformed into a consumption-driven society. The consumption power and willingness of consumption of the public are both rapidly increasing. In the New Norm phase of economic development, the retail market is favored by the government policies as well as an immense bonanza. The cornerstone of future commerce lies in the ability to provide consumers with more premium, diverse and convenient products and experience. The Group's next step is to uphold our long-standing corporate philosophy carried forward over the past decade to undergo extensive exploration. In respect of consumer service, the Group is further improving consumer experience through strengthening the attractiveness and appeal of our plazas and increasing our contribution to the society. In respect of asset operation, by chiming with the development of China's finance market and drawing on international experiences, the Group will actively explore "asset recycling" and asset-light model, so as to further accelerate the expansion of properties held and further enlarge our market share in China's key retail markets. In doing so, The Group can ensure a healthy balance sheet and better returns for Shareholders.