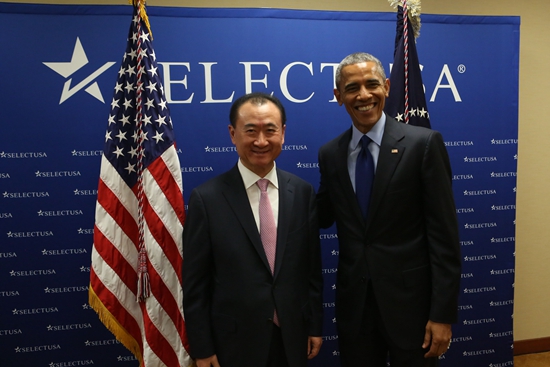 US President Barack Obama met with Wang Jianlin, Chairman of Wanda Group at the SelectUSA Investment Summit on March 23 local time, in the Washington, DC area.

Obama made it clear that the United States will help to create a more favourable environment and warmly welcomed companies such as Wanda Group to invest in the United States. Chairman Wang Jianlin thanked Obama for the chance to meet. Mr. Wang indicated that internationalization would become the company's main strategy going forward and expressed his willingness to continue investing in the US to further promote the development of bilateral economic and trade relations between the two countries. Wang Jianlin was the only Chinese entrepreneur that was invited for a meeting with Obama during th summit. 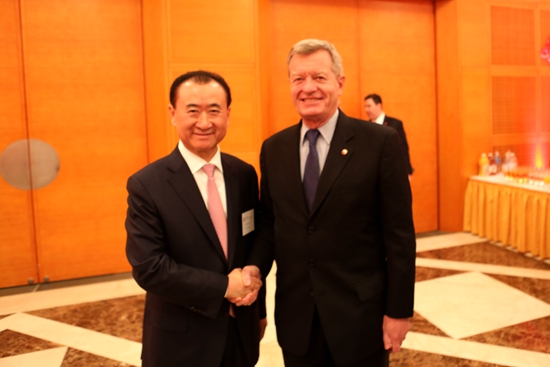 Wang Jianlin also met with Mr. Max Sieben Baucus, Ambassador of the United States of America to China. Both men engaged in conversation on a broad range of topics including bilateral trade and economic relations, bilaterial investment as well as Wanda's investment plans in the US.

That same day the Chairman was invited to attend the China General Chamber of Commerce - USA 2015 China-US Investment Reception by the Embassy of the People's Republic of China in the United States. The Chairman was chosen as the only Chinese entrepreneur to give a speech at the event. Ambassador Cui Tiankai took time in his opening speech to mention the positive effect that Wanda's investments in the United States have had and praised Wang Jianlin as a role model for all Chinese entrepreneurs. In his speech, Wang Jianlin mentioned that he will continue to focus on investment opportunities in the US and further promote bilateral economic and trade relations between the two countries.

At the summit, Mr. Wang also met briefly with former US Ambassador to China, Gary Locke.

Next： Wanda signs strategic cooperation deal with Bank of Kunlun