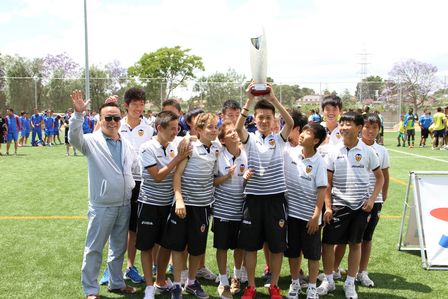 "Future Soccer Stars” pose with the trophy for a group photo after the final. 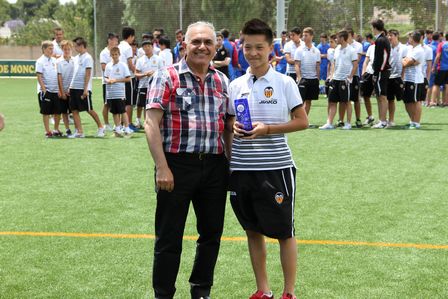 Captain of the champion group Bai Xuyao (R) was awarded as the most valuable player.

A group of “Future Soccer Stars” from China has won the championship of the Infantil category in Miguel Tendillo Tournament held in Moncada, Spain from June 7 to 9.

Selected by Spanish coaches and sponsored by Wanda Group, some 30 Chinese teenagers were sent to Spain last August to receive trainings from top Spanish soccer clubs including Atletico de Madrid, Villarreal and Valencia.

Ten Chinese boys trained by Valencia Club of Football, representing the Infantil B squad, defeated the Levante Unión Deportiva in the final to take the crown of Infantil category which was for 13-14 years old. Captain of the champion group Bai Xuyao was awarded as the most valuable player.

The Miguel Tendillo Tournament is a traditional match with 18 years’ history. Many Spanish football stars have participated in this tournament at their early years.