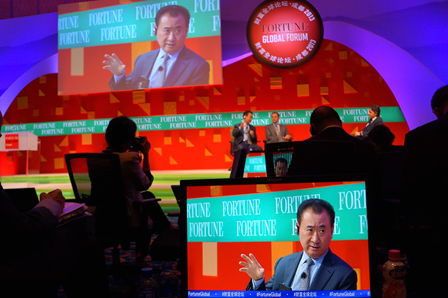 Wanda Group Chairman Wang Jianlin shared his perspectives on Chinese companies’ internationalization, Wanda’s foray into the culture industry and the future of Chinese economy at the Fortune Global Forum held in Chengdu, Sichuan Province on June 6.

Themed "China's New Future", the 12th Fortune Global Forum will take place from June 6 to 8 and will bring the CEOs of the world's biggest multinational companies, entrepreneurs and scholars to Chengdu.

Wang believes in order to export Chinese culture, a company needs to build its own international distribution channels, which requires hefty investment.

"Wanda will join hands with world-class movie companies to produce Chinese movies that will be distributed worldwide,” said Wang at a CCTV-moderated panel of the forum, adding that he is talking with the top five US film companies about setting up joint ventures.

He also revealed that he didn’t rule out the possibility to purchase some television stations outside China.

Talking about international cooperation on culture industry, Wang points out that it is fundamental for developed countries’ companies to get adapted to the emerging markets and respect the market and the local consumer, only then business could be successful.

"The ‘Iron Man 3′ shows precisely the lack of respect for the Chinese market,” said Wang, referring to the blockbuster film which was meant to be a US-China co-production. However, it just picked up two Chinese actors to play some unimportant roles and delete the Chinese roles while the films are on screen in the North American market.

"The Chinese film market is developing very fast in recent years, and I had a speech two years ago talking about the North America market including Canada had about $10 billion box office; and I said in 2017, and no later than 2018, the Chinese box office will surpass the North America; and in 2022, the Chinese market will be twice as that of the US. Thus you see DreamWorks has come to China and we are now negotiating with some of the United States top five film companies in respect of forming joint venture companies. At the same time, the Chinese elements in American movies are also increasing,” said Wang.

>Cultural Tourism City is not a copycat of Disneyland

Wang noted that the Wanda Cultural Tourism Cities, which his company is pressing ahead in China, will pose no competition to Disney at all.

"Every project like this will cover several square kilometers of land, what we call Wanda Tourism City, ” explained Wang, “There will be small theme parks within the so-called ‘cities,’ not as big as Disneyland, and not an open park. It's roofed like the Terminal 3 off of Beijing International Airport. There will be lots of catering, restaurants, indoor entertainment, high-tech movie theaters, karaoke, and bars and hotels. So the theme park is only part of the Tourism City.”

The first Wanda Tourism City has broken ground in Harbin, Heilongjiang Province this April. After completion, it can accommodate 50,000 visitors simultaneously. The annual income will be around 6 billion yuan and the tourism city will hand in 500 million yuan in taxes every year.

>International M&A to be pressed ahead

Wang said at the forum that Wanda will seek further development by innovation and international M&A in the future.

"In the next 10 years, Wanda will invest $10 billion on the US market while the number will hit $30 billion worldwide,” according to him.

Last May, Wanda Group purchased AMC's entire stake and inherited its debt with $2.6 billion. The merger made Wanda the world’s largest cinema operator.

Wang expressed satisfaction that the AMC has turned around in less than a year after being acquired by Wanda Group.

"If a company wants to enter a foreign market successfully, it needs to build up trust with locals, appreciate local employees’ value, apply the localization strategy of talents and manage with information technology,” he added.

>Another spring for private companies is to come

Wanda Group will invest an average of over $20 billion a year in China as the he is confident about the Chinese economy.

Although the domestic economy has slowed down somewhat now, with appropriate reforms, the economy can quickly bounce back, Wang noted.

The Chinese government has set an urbanization rate target of 70 percent by 2020, which would translate into nearly 200 million people migrating into urban areas over the next seven years, taking into account the current population living in cities without hukou, or household registration, Wang said.

"These people need jobs, housing, food and entertainment, such as going to a cinema, and the demand will fuel the Chinese economic growth at around 8 percent per year for at least another decade," he said.

"I believe another spring for private enterprises is coming with more investment opportunities and broader development space.”