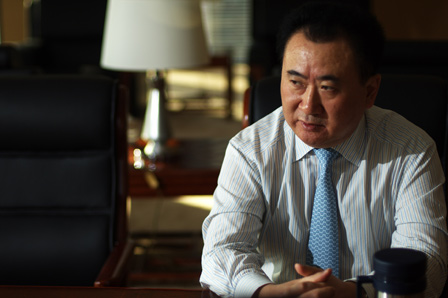 The famous Fortune magazine published a feature story about Wanda Group Chairman Wang Jianlin on its website on May 23.

Wang, ranking second on Forbes’s China Rich list and also a member of the Standing Committee of the Chinese People’s Political Consultative Conference and Honorary Chairman of the China Charity Federation, has drawn much attention from overseas media since Wanda’s $2.6 billion acquisition of the AMC Entertainment last May.

In his story titled “What's driving one of China's richest men?”, he described Wang as indefatigable, bold, strict, ambitious and upright.

“Wang's reputation is unmarred by scandal -- no mean feat for a man of his wealth and influence in today's China, particularly in the realm in which he operates,” said Whitford in the story.

"To him, that's the essence of the Chinese dream: companies like his building wealth, spreading influence, and paving the way to Chinese dominance on the global stage.”

The story can also be found in the magazine’s June 10 issue, which will be handed out to participants of the Fortune Global Forum taking place in Chengdu, Sichuan Province from June 6 to 8.

Fortune is a global business magazine published by Time Inc. and founded in 1930. The magazine is especially known for its annual features ranking companies by revenue.