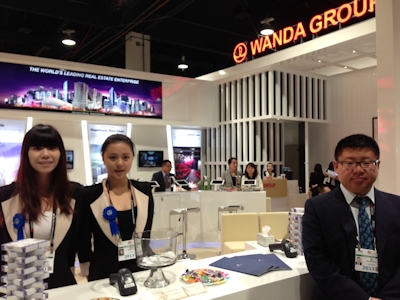 Staff pose for a photo in Wanda's booth at ReCon2013 in Las Vegas.

China’s leading property conglomerate Wanda Group attended the Global Retail Real Estate Convention (ReCon) in Las Vegas on May 19, 2013, the first time for Wanda Group to appear at the international event as an exhibitor and registered member.

The company expects to learn from its foreign counterparts and share its experience at the event held in Las Vegas Convention Center from May 19 to 22.

The ReCon is organized by the International Council of Shopping Centers, the global trade association of the shopping center industry.

"Wanda probably has some plan for overseas development and I believe it will find and connect with some overseas sources in the event,” said Marvin Morrison, senior vice president at ICSC, during an interview with Sina website in March.

"For exhibitors from other countries, Wanda’s participation will help them realize Chinese market’s value,” he added.

Wanda also sponsored the shuttle buses and an international cocktail reception of the event, according to Morrison.

Wanda is no stranger to the US public after it purchased AMC, the world’s second largest cinema line, with $2.6 billion under an agreement signed on May 21, 2012. The merger, which attracted more than 500 media across the globe, is Chinese companies’ biggest one in the US ever and made Wanda the world’s top one cinema operator.

Wanda Group Chairman Wang Jianlin told reporters earlier this year that Wanda will expand its global business unswervingly and will finish one or two acquisitions within 2013.

Next： Wanda to build hospital with shock-absorbing technology