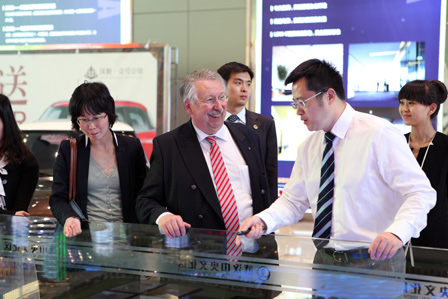 André Flahaut, president of the Belgian Chamber of Representatives, was marveled by Wanda’s ability and creativity while visiting the Wuhan Central Culture District in the capital city of Hubei Province on May 18, 2013.

Flahaut was amazed by the layout and the scale of the district, and also showed a keen interest in the Han Show and the film amusement park, which are to be unveiled next year.

“Wuhan is a dynamic and exciting city while Wanda Group’s ability and creativity to build such a huge culture center is very impressive,” said Flahaut.

Wuhan Central Cultural District is situated in downtown Wuhan, between the East Lake and the Shahu Lake in Wuchang District. The project has a land area of 1.8 square kilometers and a gross floor area of 3.4 million square meters. Wanda Group invested 50 billion yuan in the project. The cultural district is a multifunctional world-class cultural tourism project that offers business and office services, high-class residences and commercial space while serving as a center for tourism, culture and the arts