Wanda to Invest $7.2B in Guangzhou 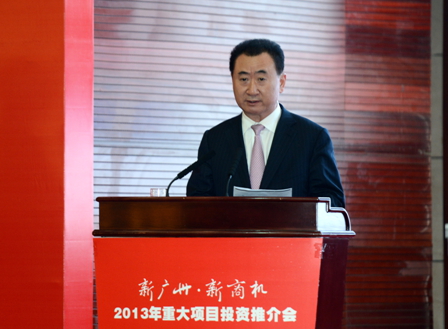 Wanda Group will invest over 45 billion yuan ($7.2 billion) to build four more large projects in Guangzhou, said Wang Jianlin, Chairman of the Wanda Group, at an investment promotion conference in Guangzhou on March 28.

The projects include three Wanda Plazas, and Wanda City of Culture and Tourism with an investment of 20 billion yuan ($3.2 billion).

“Wanda has always attached great importance to its development in Guangzhou and has built three Wanda Plazas in the city, including Baiyun, Panyu, and Zengcheng Wanda Plazas, with a total investment of nearly 20 billion yuan ($3.2 billion),” Wang said at the 2013 Guangzhou Major Project Investment Promotion Conference.

“The development in Guangzhou has benefited Wanda and greatly strengthened our confidence in increasing investments in the city.”

Chen Jianhua, Mayor of Guangzhou, met with Chairman Wang and other well-known entrepreneurs on the afternoon of March 27.

During his stay in Guangzhou, Chairman Wang was interviewed by a number of local media. He mentioned in the interviews that Wanda Group plans to build over 30 projects in Guangdong Province in the next 5 to 8 years.