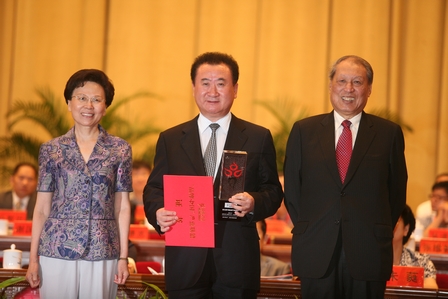 The opening ceremony for the 5th China Brand Festival cum the Award Ceremony for the 2011 China Brand Huapu Award organized by the Industrial Association of China Brand and China International Chamber of Commerce were held in the Great Hall of the People on August 8 morning. After public nomination and voting, and panel evaluation, Dalian Wanda Group has won the China Brand Huapu Award for the 4th time. Cheng Siwei, Honorary Chairman of the organization committee of the 5th China Brand Festival extended the award certificate and the cup to Chairman Wang Jianlin. Chairman Wang gave the speech with the topic of Integrity and Creativity by invitation.

“Huapu” refers to Chinese faces. The award represents the highest honor in the branding efforts of the private companies in the year, and it’s awarded to the companies with outstanding achievements in brand building. The award is set up in an effort to promote the global presence of Chinese brands, help the world to gain better understanding in China through Chinese brands, and to enhance the international reputation of China. Wanda Group has won the Huapu Award in 2008, 2009 and 2010, and the award it received this year was the fourth one. The 2011 Huapu Award Wanda received showed that the Wanda brand has deeply rooted in people’s hearts, and the effort Wanda put in delivering integrity and innovation has been recognized by the society.