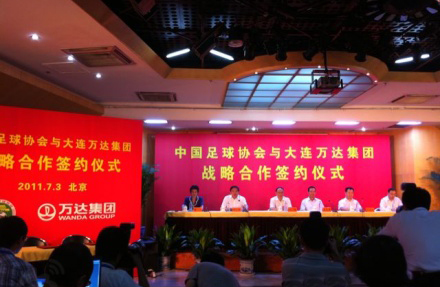 After staying away from Chinese football business for 10 years, Dalian Wanda Group, the most successfully-run enterprise in the Chinese Football Professional League history, returned to the football business with a whole new concept. On July 3, ‘The Launch of the China Star of Hope Football Team Europe Training and the Signing of the Strategic Partnership Agreement between China Football Association (CFA) and Dalian Wanda Group’ were held at Beijing Science and Technology University. Chairman Wang Jianlin announced that Wanda will spend at least RMB 500 million in the next three years to support the promotion of the Chinese football. We learned that this was the largest lump-sum donation in the Chinese physical education history since the country was founded in 1949.

The keynotes of the strategic partnership was: Wanda will work together with the CFA to select candidates below age 16, form the China Star of Hope Football Team and send them to Europe in the next three years till 2013. There will be three batches with all together over 60 people selected and sent to three top European football clubs in the next three years. Selected football players will not play as a team, but will be assigned to and integrate into the youth team in the clubs for training and playing in games. This would be an adventure for the Chinese football business to reach out. Wanda will finance the National Youth Football League of three age groups between 10-17, and provide the awards to the winners, in order to rouse the youths’ passion for the game, expand the football-playing population and lay solid groundwork for football development. Wanda will provide sufficient fund for the CFA to select and acquire world-class foreign head coaches to lead the Chinese National Team; the appointment period will be three years to give the foreign head coaches sufficient time to build and train the team. Wanda will sponsor the China Super League and provide financial support to domestic professional leagues. As a system approach, Wanda and the CFA will review and improve the existing assessment and reward system, significantly raise the benefit packages for the judges as an incentive for them to boost their professionalism, so as to ensure the impartiality of their judgment practices. Provide financial support to the National Women’s Football Team, sponsor the Chinese Women’s Super League, and rouse the nation’s attention on and passion for women’s football games. The Agreement also stipulates that all the funds in the sponsoring programs should be used exclusively for the purposes specified between Wanda and the CFA; in order to ensure the huge amount of money works to its best results, Wanda retains the rights to make suggestions, supervise, and audit the expenses at any time.

The Comprehensive Supporting Scheme is the intellectual fruit of Wanda gathering opinions from all walks of life over the last year; it’s a football promoting plan that targeting directly the fields with the most urgent needs, and it combines the current condition with the future goals. From nurturing the talent in the pool, to supporting the development of the national team; from sponsoring the Chinese Super League to the new assessment scheme on judges; from professional football to campus football, it seeks to help to solve the fundamental problems in the Chinese football activities, and lead the Chinese football to thrive again.

Wanda Chairman Wang Jianlin notes, with the close attention of the CPC Central Committee leaders on football games in the last two years, the measures to improve the football industry environment have seen significant effects. Football is seen as the world’s most important sport; China needs to promote the healthy development in football as the economy grows. In addition to the demand by the country and the society and the guidance from the central government, another reason Wang mentioned for Wanda’s generous supports in football business was that he was a football fan himself. Wanda sincerely hopes this would help the Chinese football to regain its foothold, proceed to a boom and bring joy to people.

Dalian Wanda Group started actively participating in the Chinese football reform towards professionalization from 1993. Dalian Wanda Football Club was the first and the most successful professional football club in China in the China Jia-A league era, with a record of 55 consecutive wins. Wanda club attended the AFC Champions League several times; it has entered the top-four list every time, and won the second place once.

Wanda Group takes ‘create wealth together, benefit public welfare’ as the corporate mission; in the last 23 years since inception, it has cumulatively donated over RMB 2.8 billion in cash to public welfare and charities, with donation over RMB 300 million in cash every year in the last three years. Wanda has won the China Charity Award four times, the only enterprise who won four times among all the enterprises in China.