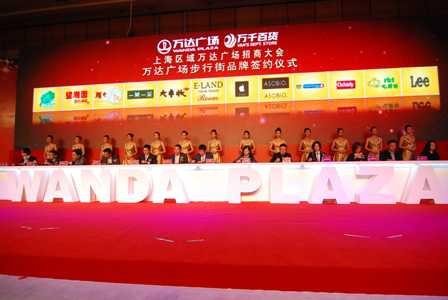 With the Jiangqiao and Baoshan Wanda Plazas slated to open in 2011, together with the existing Wujiaochang and Zhoupu establishments, Wanda will be positioned in the core eastern, southern, western and northern parts of Shanghai, thereby fully promoting its regional expansion strategy in Shanghai.

Jiangqiao Wanda Plaza is a masterpiece of Dalian Wanda in the company’s development. It serves three functions, namely “full-featured urban residential area, super commercial cluster and integrated central business district”, forming a mega urban complex with an area of 550,000 square meters that encompasses metro line 13 and line 17. Upon completion, it will totally change the scenario at Jiangqiao where there is a lack of commercial centers and it will provide one-stop services to more than a million residents in Jiangqiao and its neighboring areas, thereby stimulating the upgrading of commercial facilities in the entire region.

Next： Land delisting for the Erqi Wanda Plaza project in Zhengzhou